Dancing with the Idea of Death 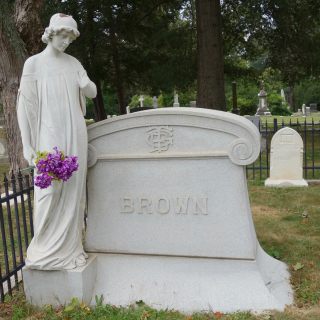 This past summer while complaining to my law professor and summer employer, Tanya Marsh, about my dismal excuse for weekend excitement she decided to invite me to a conference where she was scheduled to speak. A road trip—that sounded like a great idea. Immediately, I was ready to say yes. Then the topic of the session and conference surfaced “Who Owns the Dead” was Professor Marsh’s session (which by the way is very misleading —the dead are not property and therefore cannot be owned) at the bi-annual conference for the Funeral Consumers Alliance (FCA). In the wisdom of some great employment advice I once received—always say yes to new ideas, projects, and opportunities—I was off, death bound, to Atlanta.

During the time leading up to the conference I tried not to think too much about what I might find there. My experiences with death up to that point were not light. Even as a young person, I had encountered deaths of family friends, family members, and even high school classmates. The routine was always the same, pay your respects at the funeral home and then attend a funeral service before burial. It was never quite clear to me if when paying “your respects” it was to the deceased, or to their family, but in the moment there was no time to question the formalities. Instead, it was a time to follow your parents’ lead and to provide support, compassion, and empathy to those grieving—and that I did without even one question. Questions however, became the theme of my time at the FCA conference. I questioned the practices of the funeral industry, the practices of my family, the law, the economics, the convention, the science, the truth, and the very idea of death and what it means to me and to others.

The conference brought too light so many interesting death related problems that had never crossed my mind. When someone dies who do you call? Can you move and transport the body? Is it a health risk while in your house? Do you need to embalm the body? Do you need to have a viewing in a funeral home? Can you have the body cleaned and laid out your own home? How do you get a death certificate? Who can help you plan? And each of these questions beckoned nuisances like what is the law? What is the normal protocol? What is the expectation? What would the deceased want?

In hearing each answer more questions flowed and soon I realized that I was surrounded by those whose life was essentially death. These individuals included some funeral directors, some death care entrepreneurs, and some without a category at all made caring for the dead and those touched by death their very life’s work. Even more astonishing, was seeing the vitality with which they all advocated for the beauty and peace of death. With this realization, I started my own journey to join their mindset. Death is mysterious and unknown, but more than that, it is inevitable. We want in life the ability to freely choose how, when, where, and why. We live with purpose, passion, and conviction. We think about and learn about the world around us—but too often we fight the thought of dying. The thought of leaving all that we know and entering the unknown. But, the thoughts about death are what lead to questions about life and about living.

The conference ended with final dinner during which author Kate Sweeney read some excerpts from her new book, American Afterlife Encounters in the Customs of Mourning. The excerpts were some of Kate’s favorite stories about loved ones left behind and how they decided to deal with their loss. One particular story was about individuals that wanted their remains made into coral reefs, and how Kate joined these families as they set out to sea to experience their loved one’s final resting place. The scene she set was not one that reminded me of my experiences with mourning, nor was it a scene that reminded me clearly of anything I have yet experienced. But in that scene was a hope and a peace, an answer to the millions of unanswered questions about death. The truth is that where we are left when we die means very little in comparison to whom we leave behind.

The consumer of funeral services is not the deceased, it’s the living left behind. In that truth is the answer also to whom respects are paid—they are paid to the living, to those mourning the death. The FCA conference taught me that thinking about death is an essential part of life and that there are joyful, dedicated, and compassionate people that live in order to make death just a little more bearable. What we owe them, to ourselves, and to those we will leave behind is more than a thought about death when it’s on our doorstep. We owe each of them a dance—a dance with the idea of death. The idea of our own death, what it means to us and more importantly what it means to our world, especially our own little corner of the world that we leave behind.

The internet has transformed the way Americans shop from cradle to grave, the funeral industry has a little more catching up to do. A Federal Trade Commission (FTC) rule governing price disclosure for funeral homes was last updated in 1994, its language failing to predict our nation’s coming obsession with online commerce. A petition submitted to the FTC this July by the Consumer Federation of America and the Funeral Consumers Alliance seeks to update this rule to bring more funeral home pricing online and into the 21st century.

The FTC first adopted its “Funeral Rule” in 1984 and last revised it over 20 years ago – long before ubiquitous internet access and the cultural norm of online comparison shopping. The Funeral Rule attempts to provide protection to consumers by requiring funeral directors to provide a written, itemized general price list upon request and to inform consumers of their right to purchase services and products a la carte. In recognition of the vulnerability of funeral consumers in the wake of loss, such required disclosures enable the buyer to make informed decisions about the funeral services and products they purchase. However, as written today, the rule applies to requests for pricing either over the telephone or in person. Nothing in the rule contemplates the role the internet now plays in making purchasing decisions. As consumers have grown used to the transparency and ease of price comparison online, the Funeral Rule has been left untouched, and the funeral industry has been reluctant to change on its own. An October 2015 survey of funeral industry practices nationwide revealed that fewer than 25% of funeral homes with websites fully disclosed their prices online.

Of those funeral providers that do publish prices online, many only disclose their rates for all-inclusive packages without informing consumers of their right to purchase products and services a la carte. If these funeral homes failed to inform consumers of this right in a paper disclosure, it would directly violate the FTC Funeral Rule. However, as it stands today, it is completely legal for a funeral home with a website to publish limited, misleading, or even no pricing information online. Bereaved consumers visiting these websites are often met with slick targeted marketing, but denied crucial information about the costs associated with the images being sold.

The costs are not insignificant. In 2015, the median cost of a funeral with viewing and burial was just over $7000. However, a 2011 study cited by the petitioners found that approximately half of all American households would struggle with an unexpected expense of only $2,000. Few people would consider a funeral an optional expense, but many Americans have difficulty affording one in today’s market. When prices are kept out of public sight, the market lacks the competition necessary to lower costs.

The petition from the Consumer Federation of America and the Funeral Consumers Alliance calls for the FTC amend its Funeral Rule to include mandatory online price disclosures for funeral homes with websites. Proponents of the amendment argue that requiring online price disclosure would bring funeral homes into compliance with the spirit of the original Funeral Rule – that a consumer engaging in a sales interaction with a funeral home has the right to an itemized general price list, whether that interaction is in person, on the telephone, or through a screen. They also argue that increased availability of pricing information online will act to deflate the artificially high funeral industry prices through consumer access and choice.

Although the Funeral Rule is slated for review in 2019, consumer advocates are adamant that now is the time for revision. In a press release from the Consumer Federation of America, Josh Slocum, Executive Director of the Funeral Consumers Alliance, remarked, “We hope that the FTC acts promptly upon our request. … Grieving families don’t have time to wait.” The petition was submitted on Amazon.com’s “Prime Day” to underscore our culture’s firm entrenchment in its online shopping habits.