The Struggle for Closure at Florida's Dozier School for Boys 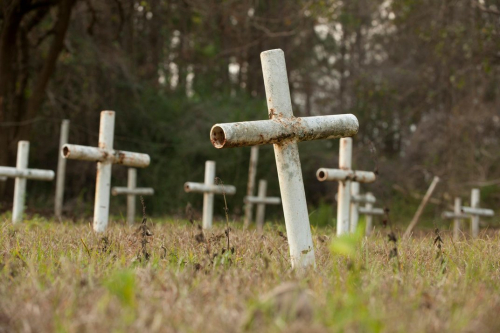 Arthur G. Dozier's School for Boys, which opened in Marianna, Florida, in 1897, was the first juvenile detention center for boys in the state. The institution was active for over a century until its closing in 2011. The original statutory objective of the school was

"the making of . . . not simply a place of correction, but a reform school, where the young offender of the law, separate from vicious associates, may receive careful physical, intellectual, and moral training, be reformed and restored to the community with purposes and character fitting for a good citizen . . . ."

The school from its inception accepted boys of all races, but maintained segregation between its white and black "offenders." Young white men were kept to the south side of the school, while young black men were kept to the north—next to the unmarked northern cemetery.

Dozier's history is plagued with accusations of abuse that did not seem to affect any real longterm change. This history and testimony from survivors of the institution inspired a forensic anthropologist from the University of South Florida, Dr. Erin Kimmerle, to initiate an investigation, with a plan to map the unmarked graveyard with ground-penetrating radar ("GPR"). A simple field survey lead her team to believe that the Dozier campus's northern cemetery contained more graves than the school's records provided for, and that a second cemetery existed on the south side of the campus. A permit for excavation was granted in 2013 and by 2014, Dr. Kimmerle's research indicated that there were 55 individuals buried on Dozier campus—twice the number the school had accounted for.

The call for further investigation and its results led to discourse in the community. This was a sensitive topic, to the victims, the survivors, and family and friends of both, as well to locals without any direct connection to the school. The county, eager to clean its hands of the whole mess, tried to sell the land in 2012. The relative of a victim was able to get a judge to halt such proceedings. The people left behind by the tragedy of Dozier were hurting and wanted answers, while the locals of the area felt that the accusations being brought forth were a personal insult—they fought back by threatening to charge Dr. Kimmerle with the felony of disturbing "a human grave without authority," although no graves had been disturbed.

The legal route also failed Dr. Kimmerle at this time. A judge denied a petition for exhumation, stating that Dr. Kimmerle's team failed to "meet the threshold for exhumation, [that] there must be more than a suggestion that an autopsy might be probative." Instead the evidence must show that exhumation shows a "good possibility that an autopsy would be revealing as to the cause of death." Judge wright cited the case Currier v. Woodlawn Cemetery, 200 N.Y. 162, 90 N.E.2d 18 (1949): "The quiet of the grave, the repose of the dead, are not lightly to be disturbed. Good and substantial reasons must be shown before disinterment is sanctioned."

While Dr. Kimmerle was able to successfully excavate and exhume the bodies at Dozier, validating the allegations of victims, survivors, and relative, the whole affair and its aftermath leaves plenty of questions behind: How was the school allowed to get away for this so long? How far does community pride go in shielding the evils happening in our own backyard? And why was respect for "the quiet of the grave" so much more important than justice?

People have speculated on most of these questions for a lot longer than Dozier's excavation scandal has existed. One has to wonder, though—how could a judge find the graves of potential torture victims to be "quiet?" The broader concept of this question is what now plagues the community. The State has drafted and passed plans to turn the Dozier campus into a memorial while also covering "the cost of funerals, reinterment, and grave markers for the boys." Some people think that the legislature has no business getting involved in what happens to these boys' remains. Another camp may believe that these boys deserve this quiet of the grave often referenced to in the common law of human remains, and such quiet will not be found at the site where they suffered. Most everyone can agree that some memorialization is necessary, either for the individual victims, survivors, and loved ones, or to just acknowledge that something heinous occurred and was allowed.

Callaway, Florida. Two funeral directors were arrested this summer after Bay County Sheriffs discovered sixteen corpses in various stages of decomposition throughout Brock’s Home Town Funeral Home.   At 5 PM on August 18, officers from the BCSO entered the funeral home and immediately noticed an abundance of flies buzzing throughout the funeral home. They soon realized that six bodies were being kept in the parlor of the funeral home without any refrigeration at all, causing the bodies to decay. There were an additional ten corpses being kept in the funeral home’s “cooler” at a temperature of sixty-two degrees. State law, however, requires that corpses be stored at temperatures not warmer than forty degrees. The funeral home had promised the families of the deceased either cremation or embalming services. However, “‘none of the bodies had been embalmed,’ officers wrote. ‘Those remains whose families requested cremation had not been cremated.’”

Following this grisly discovery, Gregory Dunphy, the funeral home’s director, and Felicia Boesch, the daughter of the home’s owner, were charged with 16 counts of unlawful storage of human remains.  Yet bringing charges against Dunphy and Boesch did not even begin to address the issues that now faced the families of the deceased.

Following the arrest of Dunphy and Boesch, responsibility for the bodies being held at Brock’s Home Town Funeral Home fell to local authorities.  Specifically, the 14th Judicial Circuit’s Medical Examiner’s Office was tasked with the arduous undertaking of “going through the paperwork for each of the deceased to see what the families wanted for their loved ones and honor those requests.” To make matters worse, many, if not all, of these families had to pay cremation or embalming fees a second time. According to local officials, “if another funeral home doesn’t step up to offer assistance, the families of the 16 deceased likely would have to pay out of pocket and then pursue relief through the civil courts.” Given the fact that Brock’s was “primarily a low-income funeral home,” these families were likely put under tremendous financial stress by this horrible turn of events.

In short, the Brock’s Home Town Funeral Home fiasco was nothing short of a nightmare for those involved and illustrates the importance of regulation of the funeral home industry so as to avoid similar catastrophes in the future.

In the opening months of the Civil War, soldiers were buried near the place they died.  But as wartime casualties began to mount and it became apparent that the war would last longer than initially expected, Congress saw the need to create a new system for respectfully processing the startling numbers of casualties.  In July 1862, Congress authorized President Lincoln to purchase land to be developed into a national cemetery for soldiers who give their lives in the service of their country.  This was the first piece of national legislation suggesting a national cemetery.

Arlington National Cemetery is easily the most famous of these cemeteries.  The land encompassing what is now Arlington National Cemetery was once inhabited by General Robert E. Lee and his wife, Mary Anne Randolph Custis, granddaughter of George and Martha Washington.  After Virginia joined the Confederacy and ceded from the Union in May 1861, the Union Army occupied the property.  Three hard years later, Quartermaster General Montgomery C. Meigs recommended the property be used for the burial of war dead.  On May 13, 1864, Private William L. Christman became the first person laid to rest at Arlington.  A month later, Secretary of War Edward M. Stanton ordered General Lee's home, Arlington Mansion, and up to 200 acres of the property be used as a cemetery.