Historically, Brooklyn's Green-Wood cemetery has been selected as the final resting place for many buzz-worthy people, such as composer Leonard Bernstein, newspaperman Horace Greeley, "Wizard of Oz" actor Frank Morgan and artist Jean-Michel Basquiat. But, of late, Green-Wood has some new, lively residents, over 600,000 honeybees. 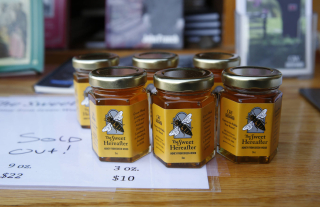 These bees are responsible for producing the locally acclaimed honey named, "The Sweet Hereafter," which is sold from a wheeled cart outside the cemetery's gothic gate.

Up until 2010, New York City had a ban on beekeeping. But, one day in 2014, while sitting in Green-Wood's central chapel, Davin Larson, who worked with bees while growing up in the Midwest, came up with the idea to keep beehives onsite. Green-Wood and its sprawling 478 acres of greenery is one of the larger green areas in New York City, which seemed like an ideal location to keep bees within the limits of the city.  Larson proposed his idea to a cemetery volunteer and backyard beekeeper, Nicole Francis, who then sold the concept to the cemetery's public programming director. Larson was originally concerned that families who have relatives buried at the cemetery would object to the idea, but he says, "they've been nothing but supportive."

The bees not only produce lots of honey, this year alone the beekeepers harvested 200 pounds of honey, but also help to beautify the landscape by pollinating tons of flowering plants and trees. Larson did not want to interrupt the surrounding landscape when installing the hives, so with some innovation, he propped up the hives on excess, uncarved headstones that were previously stored 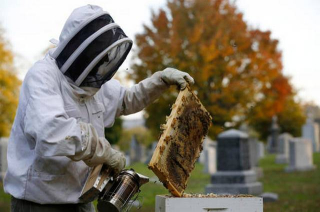 in the cemetery's workshop to make them appear almost as grave markers. But, maintaining the hives can be expensive, so supporters of the beekeeping are encouraged to make donations on the Green-Wood website to sponsor hives and efforts of Larson: $500 for one hive, or $250 for half a hive. This is the second year that Green-Wood has produced honey. The honey from this year's harvest is for sale the weekend of November 12-14 outside the main entrance of the cemetery. Overall, the community seems to enjoy the idea of having locally produced honey and regards the efforts of Larson as the "Bee's Knees."

Crown Hill Cemetery was incorporated as a non-profit, non-sectarian cemetery in September 1863.  The cemetery originally included 236 acres of farmland located north of Indianapolis, Indiana.  The first interment, of Lucy Ann Seaton, took place on June 2, 1864.  In 1866, the federal government purchased a portion of the cemetery and dedicated it as a national cemetery for the interment of Union soldiers.  Additional acreage was purchased in 1869, 1886, 1887, and 1911. The cemetery currently includes 555 acres, which makes it the country's third largest cemetery.

I grew up a mile away from Crown Hill Cemetery and it has always been at the edge of my consciousness.  It has only been in the last few years that I've taken the time to really explore the cemetery, which serves as a guide to the history of the city of Indianapolis.  My most recent visit took place on November 8, 2016.

Crown Hill Cemetery is named, transparently, for a hill known as "The Crown."  Before Indianapolis merged with Marion County in the 1970s, The Crown was the highest point in the city.  (For those interested in Indianapolis trivia, the highest point is now in Pike Township.)  At the top of The Crown is the tomb of James Whitcomb Riley.  Riley, known as the "Hoosier Poet," was born in Greenfield, Indiana in 1849.  Although Riley is now little known outside of Indiana, he was famous in his day, primarily for his poems "Little Orphant Annie" ("An' the Gobble-uns 'at gits you Ef you Don't Watch Out!") and "The Raggedy Man."  His death in 1916 was national news.

Posted at 10:33 AM in Cemeteries, Cemetery Tourism, Indiana | Permalink | Comments (2)

Cemetery Tourist: The Complicated History of The Lee/Custis Estate and Arlington National Cemetery

I visited Arlington National Cemetery this weekend.  It was a beautiful day but I cannot help but think about the complicated history of the place when I visit there.  The following text is excerpted from How Arlington National Cemetery Came to Be, by Robert M. Poole in Smithsonian Magazine with photographs from my recent visit.  The first photograph is taken from the front yard of the Arlington House looking across the Potomac to the Lincoln Memorial, the Washington Monument, and the Capitol Building.  It was strategic high ground that the Union Army could not allow to remain in the hands of the general of Army of Northern Virginia—Robert E. Lee and his wife Mary Custis Lee, the step-great-granddaughter/adopted granddaughter of George Washington. 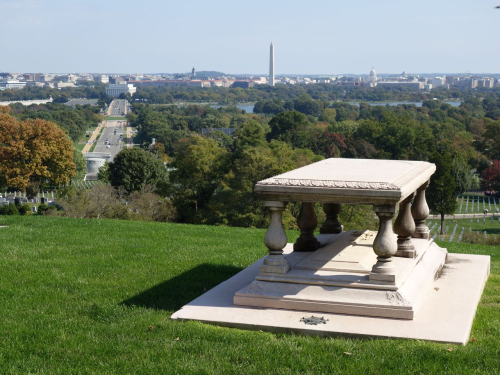 "One afternoon in May 1861, a young Union Army officer went rushing into the mansion that commanded the hills across the Potomac River from Washington, D.C. 'You must pack up all you value immediately and send it off in the morning,' Lt. Orton Williams told Mary Custis Lee, wife of Robert E. Lee, who was away mobilizing Virginia's military forces as the country hurtled toward the bloodiest war in its history.
Mary Lee dreaded the thought of abandoning Arlington, the 1,100-acre estate she had inherited from her father, George Washington Parke Custis, upon his death in 1857. Custis, the grandson of Martha Washington, had been adopted by George Washington when Custis' father died in 1781. Beginning in 1802, as the new nation's capital took form across the river, Custis started building Arlington, his showplace mansion. Probably modeled after the Temple of Hephaestus in Athens, the columned house floated among the Virginia hills as if it had been there forever, peering down upon the half-finished capital at its feet. When Custis died, Arlington passed to Mary Lee, his only surviving child, who had grown up, married and raised seven children and buried her parents there. In correspondence, her husband referred to the place as "our dear home," the spot "where my attachments are more strongly placed than at any other place in the world." If possible, his wife felt an even stronger attachment to the property. ...

Once the war began, Arlington was easily won. But then it became the prize in a legal and bureaucratic battle that would continue long after the guns fell silent at Appomattox in 1865. The federal government was still wrestling the Lee family for control of the property in 1882, by which time it had been transformed into Arlington National Cemetery, the nation's most hallowed ground. ...

I had the good fortune to be invited to present a paper at Tulane Law School this week.  I took the St. Charles Streetcar from my hotel in the Central Business District out to Tulane, and since it stops on Washington Street, two blocks from Lafayette No. 1 Cemetery, I obviously had to spend an hour or so there. It was a drizzly, coldish (high 50s) day for New Orleans, so there were few visitors in the cemetery. I've visited Lafayette No. 1 numerous times, but it was particularly affecting to visit it without a horde of tourists. 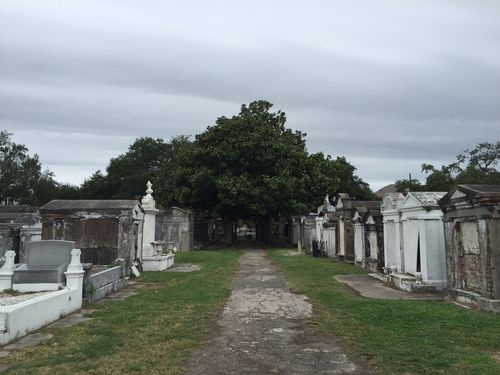