Reef Balls: An "Environmental" Option for the "Hippie" Generation?

“An Eternal Reef combines a cremation urn, ash scattering, and burial at sea into one meaningful, permanent environmental tribute to life”, states the Eternal Reef’s website; one of several companies that manufacture and deliver reef balls containing human remains into the ocean. Whilst being buried at sea has never seemed like an enjoyable or desirable disposition option, these companies are making the idea seem more and more appealing. Eternal Reef describes a four-day process of “casting” the remains into the concrete reef ball, followed by a day of setting and preparing the ball, with the viewing held on day three and the placement and dedication on day four. Families and friends are highly encouraged to participate, by placing handprints and handwritten messages on the reef ball itself, and attending the dedication on a boat provided by the company (for a fee per person, of course). This industry bills itself as an environmentally-friendly option to help rebuild underwater ecosystems in coastal areas such as Florida and the Gulf. The Reef Ball Foundation is a nonprofit set up to promote and implement these artificial reefs, although they do not involve themselves in the human remains aspect of the industry. Their website shows pictures of large concrete structures with holes placed in the concrete to allow for fish and other animals to form homes within them. 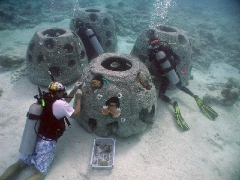 However, there have been debates about just how environmentally-beneficial these reef balls may be. A Hawaiian neighborhood board recently voted against supporting a reef ball project, due to statements by scientists from the University of Hawaii that there would be no benefit to the ecosystem. These reef balls may just be another way for us to feel superficially “good” about ourselves; we damaged the environment during our lifetime, but that will be okay because we will help it in death! The commercialization of philanthropy has been a growing business practice (“buy a pair of shoes from us and our company will donate a pair to a poor child”), but this is one of the first ways it has reached the death industry. This form of memorialization doesn’t come cheaply, either. The body must still be cremated first (which has serious negative environmental impacts in itself), then the reef balls can run from $3,000 to $7,500. The dedication ceremony involves serious travel expense, which the company can facilitate for an additional fee. If the environmental impacts do turn out to be as beneficial as the companies claim: fantastic. However, if they fall short, reef balls may just be another method for the death industry to play into the hands of consumers who want to be conscious, and are willing to spend a lot of money to do so.