Home Archives Profile Subscribe
Visiting the Hill of Slane in County Meath, Ireland
Unclaimed Remains in the District of Columbia

The Kaisergruft (or Imperial Crypt) is the last resting place of 146 members of the Hapsburg family, plus urns containing the hearts or cremains of four others.  There are 107 visible sarcophagi that range in style from plain to very ornate.

Until far in the 18th century, the most common material for a sarcophagus here was a bronze-like alloy of tin, coated with shellac. The splendid tombs of the baroque and rococo eras are made of true bronze, a nobler and therefore more expensive material. Reforming Emperor Joseph II decreed simplified burial customs for the people, and introduced the use of lighter and cheaper copper into the Imperial Crypt, where it was then used into the 19th century. In the later 19th century a mixture of cast brass and bronze as well as silver-bronzed copper was adopted. Other metals were used only rarely, except for silver and gold plating on decorations.

Within the outer case lies a wooden coffin that is wrapped in silk (black with gold trim for rulers, red with silver trim for others). The coffin usually has two locks, the key to one is kept by the Capuchin Guardian of the crypt, the other is kept in the Schatzkammer of the Hofburg palace in Vienna.

Within the coffin, the body usually has had the organs removed as a necessary part of the embalming process for its display before the funeral. For about one-third of the bodies, the heart has been placed into a silver urn and sent elsewhere (usually the Herzgruft [Crypt of Hearts]in the Augustinerkirche), and for some the intestines and other organs have been put into a copper urn and deposited in the Dukes Crypt in the catacombs of Vienna’s cathedral, the Stephansdom. 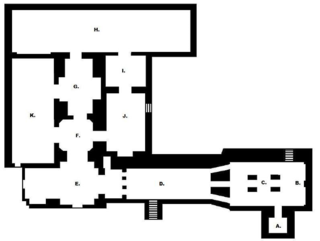 Visitors enter the Kaisergruft through the Leopoldsgruft or Leopold's Vault (C). The Leopoldsgruft was built beginning in 1657 by Emperor Leopold I.  Visitors first see the Children's Columbarium (B) on their left.  A small room directly in front of the entrance is the Founders' Vault (A), which contains the remains of Emperor Matthias (1557–1619) and Empress Anna of Tyrol (4 October 1585 – 15 December 1618). 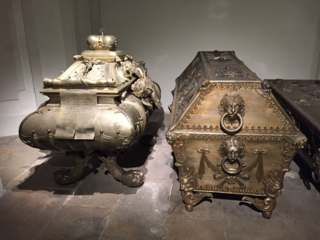 The Leopoldsgruft continues into the Karlsgruft (D), which was built in 1710 by Emperor Joseph I.  It was extended in 1720. 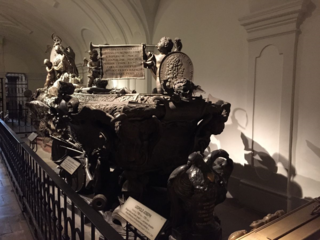 The next vault is the Maria Theresien Gruft or Maria Theresa’s Vault (E).  The vault was built beginning in 1754 and contains the incredible double vault of Maria Theresa and her husband Franz I. 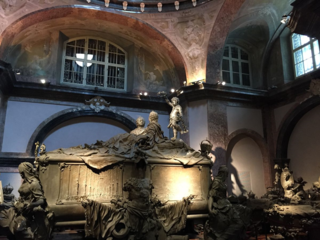 The imagery on the sarcophagi is arresting. 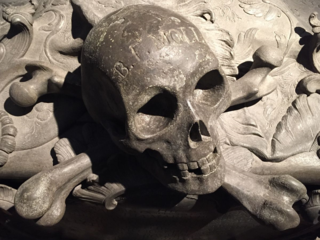 Posted at 08:00 AM in Austria, Cemeteries, International, Religion | Permalink | Comments (0)