American veterans may soon find themselves presented with new options when it comes to choosing where they will be buried. Last year, Susan Svrluga of the Washington Post reported that the nation’s veterans might have been running out of time if they wished to find themselves buried amongst their fellow soldiers in Arlington National Cemetery. In response, the Department of Veteran Affairs has launched a national expansion of the country’s cemetery system.

The Millennium Project, the government’s 27-acre expansion of Arlington, increases the cemetery’s availability into the 2050’s by creating an additional 27,000 graves. To put that in perspective, officials expected to run out of “niche space” by 2016 and in-ground burial space by 2025.

Despite this expansion, some officials are calling for more action. Rep. Dina Titus, D-Nev., has been steadily advocating for expansion of the national cemetery system. Nevada, one of eleven states without national cemetery, is also home to 300,000 veterans. As a popular retirement state, Titus worries about the burial opportunities for Nevada veterans. “I think they should have that opportunity and not be a victim of where they live,” she said in an interview with Fox News. To address her concerns, Titus has introduced legislation that would require the Department of Veteran Affairs to build national cemeteries in all states lacking a national cemetery.

Complaints about the lack of burial space outside of Washington are not falling on deaf ears. In January 2014, the VA purchased 374 acres of land in southern Colorado and plans to begin burials by 2015. Expansion of existing cemeteries has also begun in Washington State. Florida is also set to gain two new national cemeteries to service the 247,000 veterans in the state who lack a national cemetery within 75 miles from their residence.

How Manhattan’s Shortage of Burial Sites Has Affected the Market

In 1823, New York City forbade burials in a grave or vault south of Canal, Sullivan, and Grant Streets. In 1851, the City forbade interments south of 86th Street and prohibited the creation of any new cemeteries in Manhattan.  Due to the lack of available space, New York City residents have been forced to look for burial sites outside of Manhattan.  Green-Wood Cemetery in Brooklyn has some available space, but experts predict Green-Wood will be depleted of in-ground plots in less than ten years.  Jeff Richman, historian for Green-Wood Cemetery, believes  New York City residents will now consider burials in New Jersey, despite the less “historic” burial sites.  Long Island cemeteries have little to no availability, including Long Island National Cemetery, which, according to its website, only has space available for cremated remains or “casketed remains of subsequent eligible family members in the same gravesite of previously interred family members.”

Some New Yorkers have resorted to buying and selling expensive burial space.  Mr. Arthur Allan purchased his 2,064 square foot lot and mausoleum at the Woodlawn Cemetery in the Bronx for $1.1 million.  Mr. Allan has added $150,000 in improvements to the facility.  While Mr. Allan's investment seems excessive, some New York City mausoleums have actually fetched over $3 million.  Middle class residents also want a piece of the action.  Richard Fishman, direction of New York State Division of Cemeteries, revealed that people ask his department if they can disinter their parents in order to sell grave sites for a profit.

Cemeteries have changed their operations in response to the limited space.  New York passed a law that gives cemeteries the right to take over empty plots that were purchased more than 75 years ago if the owner cannot be contacted.  Maple Grove in Queens has reclaimed over 150 plots, according to state officials.  Cemetery managers are also attempting to squeeze as many plots onto their land as possible.  Cypress Hills Cemetery in Brooklyn has created grave sites on its cemetery pathways, including the front lawn which runs perpendicular to the road.  Experts expect that more changes will come as the need to accommodate Baby Boomers’ burial needs begins to grow.

This story has been covered by Metro US, The New York Times, and The Wall Street Journal. 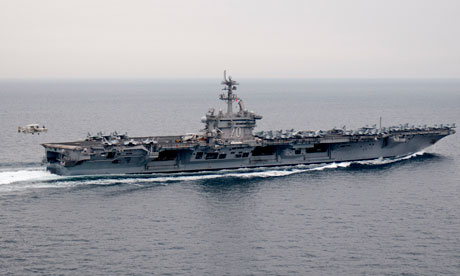 Osama bin Laden was pronounced dead on May 1, 2011 after Navy SEALs successfully carried out Operation Neptune Spear on his compound in Abbottabad, Pakistan.  Americans around the country celebrated the news that the mastermind behind the 9/11 attacks was dead.  While the government had finally found bin Laden, it now faced the issue of where to bury the most hated man in America.

Government officials obviously did not want to bury bin Laden on U.S. soil because the grave would become a focal point for the press and public.  U.S. officials also realized it was impossible to find a country to accept bin Laden’s remains.  Cremation was also not an option because it is forbidden by Islamic law.  Finally, the government decided bin Laden’s burial would take place aboard the USS Carl Vinson in the North Arabian sea.

According to Islamic law, the burial of a deceased Muslim should take place as soon as possible.  But the body must be prepared for burial.  First, the corpse must be washed until it is clean, and has to be washed an odd number of times.  The washers are typically adult members of the deceased’s immediate family and are the same gender as the deceased.  Second, the body must be shrouded in an large white sheet, or the kafan.  The kafan should be made out of inexpensive material.

Emails among U.S. military officials indicate that bin Laden was washed and then wrapped in a white sheet.  The body was then placed in a weighted bag, and the appropriate religious remarks were read.  The bagged body was then placed on a flat board, and slid into the sea.  The burial was completed within 24 hours of bin Laden’s death, thus meeting the Islamic law’s requirement.

While appropriate procedures were followed, the United States did not ensure that the weighted bag protected bin Laden’s body was from fish.  Also, burial at sea is permissible for Muslims in “extraordinary circumstances,” including when a corpse is subject to a long voyage, or the body must be buried at sea to avoid the digging up of the remains by enemies.  Predictably, opinions differ on whether bin Laden’s burial complied with Islamic law.

Indiana: The Disposition of Miscarried Fetuses

When a women miscarries a fetus, what happens to their remains?  The answer varies from state to state.  In Indiana, the law distinguishes between a "stillborn" baby and a miscarried fetus.  Indiana Code section 16-18-2-341 defines a "stillbirth" as a "birth after twenty (20) weeks of gestation that is not a live birth."  The chapter of the Indiana Code which deals with death certificates and the disposition of human remains deals with stillbirths and "dead bodies" on the same terms -- a death certificate is issued and the next of kin is tasked with disposing of the remains.

The Indiana Code is silent, however, on the disposition of the remains from a birth prior to twenty (20) weeks of gestation that is not a live birth.  Presumably hospitals classify the remains as "pathological waste" pursuant to Indiana Code section 16-41-16-5 and dispose of it in the same way that they dispose of "tissues, organs, body parts, and blood or body fluids in liquid or semiliquid form that are removed during biopsy, surgery, or autopsy."  The Indianapolis Star suggests that standard procedure is to cremate the remains in common with other biological materials, which is a method of disposing of pathological waste.

A bereavement specialist, recognizing that not being given the option of handling the remains often makes it more difficult for parents to process their grief, suggested that the law should be changed.  The Public Health Committee of the Indiana General Assembly House of Representatives will consider HB1190 this week.  The bill requires a health care facility to inform "a parent" of a miscarried fetus of their right to determine the final disposition of their fetus' remains and that the parent is responsible for the expense.

One issue with the draft bill is the reference to "a parent."  It is understandable why the bill would not give the choice only to the mother, but identifying the other parent of a miscarried fetus is somewhat problematic.  There is no legal process for determining the father of a miscarried fetus, since there is no birth certificate.  The bill does not address how the health care facility will identify the father.  Perhaps more significantly, the bill does not address how to resolve disputes between parents if they disagree about the disposition.

The executie director of the Indiana Funeral Directors' Association also noted that the bill creates ambiguity in the law because a miscarriage after 20 weeks would be simultaneously defined as a "miscarried fetus" and a "stillbirth."

A better approach would be to define miscarried fetus and require hospitals and health care facilities to give the next of kin the option to dipose of the remains in accordance with the established processes in Indiana Code chapter 16-37 that already apply to stillbirths and dead bodies.  By tracking the processes that currently exist, both for identifying next of kin and for the disposition itself, the law would minimize unintended ambiguity and give grieving parents more options for dealing with their loss.

Who determines the fate of a historic cemetery?

In July 2013, a construction crew encountered 11 historic graves in suburban Prince William County, Virginia, while building a new high school.  The graves were marked with small, uninscribed headstones.  The following November, amid public protest, all human remains were disinterred from the graves so that construction of the school could be completed.   Researchers have concluded that the graves date from the mid-to-late 19th century, and that the site was most likely the private cemetery of the Lynn family, who occupied the property from the 1740s until 1910.

The school district apparently complied with Virginia law governing the inadvertent discovery of human remains.  But the removal of the cemetery has nevertheless angered many local residents, including present-day members of the Lynn family.  In its defense, the school district claims that there was no “workable alternative” to removing the cemetery, since reconfiguring the school – or even delaying construction – would have cost millions of dollars.

It’s understandable that the county would prioritize building a new school over preserving an old cemetery.  The surprising thing is that, in doing so, the school district has acted with as little public involvement as possible.  There was no public announcement that the graves were discovered (other than a short notice in a local newspaper, as required by state law).  No public meetings or press conferences were held until after the bodies were exhumed.  No member of the Lynn family was contacted prior to disinterring the remains, even though the county’s own genealogist had discovered the Lynn connection before disinterment was complete.  Furthermore, the county genealogist admits that he only began researching the history of the graves after being “pressured by local residents” for more information about them.

There is also the lingering question of why the headstones weren’t discovered until after the construction plans were finalized.  The county conducted an archaeological survey in 2008, long before construction began.  County officials have publicly claimed that the archaeologists missed the cemetery because the site was too “heavily vegetated.”  An unnamed school official, however, told the Washington Post that evidence of a cemetery was uncovered during the 2008 survey, but was not reported to the school system until July of 2013.

The story has been covered by the Washington Post and other local newspapers.

The largest company in the funeral industry, Service Corporation International, announced in May 2013 that it had reached an agreement to acquire the second largest company in the funeral industry, Stewart Enterprises.  The deal, valued at $1.4 billion, will leave SCI with 1,1613 funeral homes and 477 cemeteries.  The Federal Trade Commission (FTC) determined that the merger would violate federal antitrust law in 59 local markets.  To resolve the FTC's concerns, SCI has agreed to sell 53 funeral homes and 38 cemeteries.

The proposed FTC order can be found here.