Matthew 27 tells us that Judas, filled with remorse following his betrayal of Christ, returned his thirty pieces of silver to the temple and hanged himself.  The priests took his blood money and used it to buy the "potter's field" as a burial place for strangers.  In America, the "potter's field" is a cemetery or portion of a cemetery used for the burial of indigents and unknown persons at public expense.

The state laws regarding the burial of indigent persons is far from uniform, and some states have no law at all.  One of the best known potter's fields in the United States, because of its size and unique history, is Hart Island in New York City.  This 101 acre island, in use since 1869, is estimated to hold the remains of nearly 1 million people.  It is managed by the City's Department of Corrections, and inmates dig the mass graves and handle the simple coffins.

A reporter for the New York Times visited Hart Island recently, and this worthwhile article is the result.

Washington Irving and the Brick Presbyterian Church on Beekman Street

The City of New York widened Beekman Street in the late 1850s, prompting the removal of 13 subterranean vaults and approximately 100 burials associated with the Brick Presbyterian Church.  The City was required to pay for the loss and damage to the land, but the question arose in the courts regarding the respective rights of the Church and the vault-owners to that sum of money.  A special referee, the Honorable Samuel B. Ruggles, was appointed to consider the legal question and report back to the Supreme Court of New York.  Ruggles' report is fascinating reading and one of the earliest restatements of the American Law of the Dead.  While reading his report today, I noticed that he mentioned Washington Irving.  Searching briefly for the letters of Washington Irving, I found this 1858 letter to his niece in which he described his efforts to relocate his family's vault from the churchyard on Beekman Street:

I have had one solemn and sacred duty to perform, of late; which was, to remove from New York the remains of such of the family as were interred in the vault in front of the Brick Church, in Beekman street.  That street was to be widened, and, of course, the churchyard invaded.  I have always apprehended some such event, and am glad it has taken place while I am here to protect the ashes of those I loved from desecration.  I accordingly purchased a piece of ground in a public cemetery established within a few years on the high ground adjacent to the old Dutch church at Beekman’s millpond, commonly called the Sleepy Hollow Church.  The cemetery, which is secured by an act of the Legislature, takes in a part of the Beekman woods, and commands one of the most beautiful views of the Hudson.  The spot I have purchased is on the southern slope, just on the edge of the old churchyard, which is included in the cemetery.  I have had it enclosed with an iron railing, and shall have evergreens set out around it.  It is shaded by a grove of young oaks.

There I have seen the remains of the family gathered together and interred, where they cannot be again disturbed; and a vast satisfaction it was, to have rescued them from that restless city, where nothing is sacred.

I have marked out my resting place by my mother’s side, and a space is left for me there.

This may seem to you rather a melancholy theme for letter writing.  Yet I write without melancholy, or, rather, without gloom.  I feel deeply gratified at having been able to perform this duty, and I look forward with serene satisfaction to being gathered at last to a family gathering place, where my dust may mingle with the dust of those most dear to me.

A lovely, and historically significant, letter.

CNN had a slideshow of 10 scenic cemeteries for Halloween.  Only three in the United States: Green-Wood in Brooklyn, Granary Burial Grounds in Boston, and St. Louis #1 in New Orleans.  A few on my must-see list, including Highgate in London and Pere-Lachaise in Paris.  Here are a few that I think CNN missed:

Founded in 1864 as a non-profit, non-sectarian cemetery, Crown Hill Cemetery occupies 555 acres approximately 4 miles north of downtown Indianapolis.  Notable burials include President Benjamin Harrison, John Dillinger, and three U.S. vice presidents.  The most prominent feature of Crown Hill is, not surprisingly, a hill.  Although it is popularly believed to be the highest point in Indianapolis (check out the great view of downtown from the James Whitcomb Riley memorial at the top of the hill), it is actually the highest point in the old boundaries of Indianapolis, but not the modern boundaries. 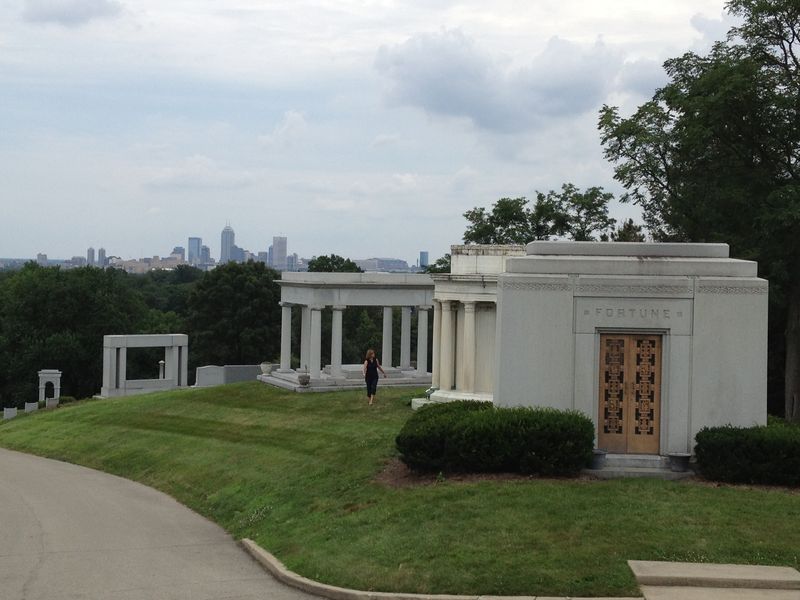 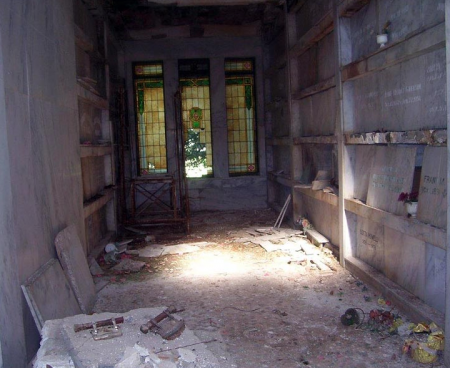 Community Mausoleum in Chicago. (Image from Order of the Good Death)

A few websites that may interest readers of this blog:

Order of the Good Death.  Authored by Caitlin Doughty, a licensed mortician in Los Angeles.  Really interesting blog posts.  Check out:  Pamphlet from 1917 Shows Death Trends Are Never Ever Forever, Not In My Backyard Crematory, and Corporate Funeral Homes: Soul-Sucking Monsters or Nice Work if You Can Get It?

The Cemetery Traveler.  Authored by Ed Snyder, a photographer specializing in cemetery statutory.

If you know of any similar blogs, please let me know.